Want to experience Microsoft 365 Defender? You can evaluate it in a lab environment or run your pilot project in production.

Some information relates to prereleased product which may be substantially modified before it’s commercially released. Microsoft makes no warranties, express or implied, with respect to the information provided here.

Each threat analytics report includes dynamic sections and a comprehensive written section called the analyst report. To access this section, open the report about the tracked threat and select the Analyst report tab. 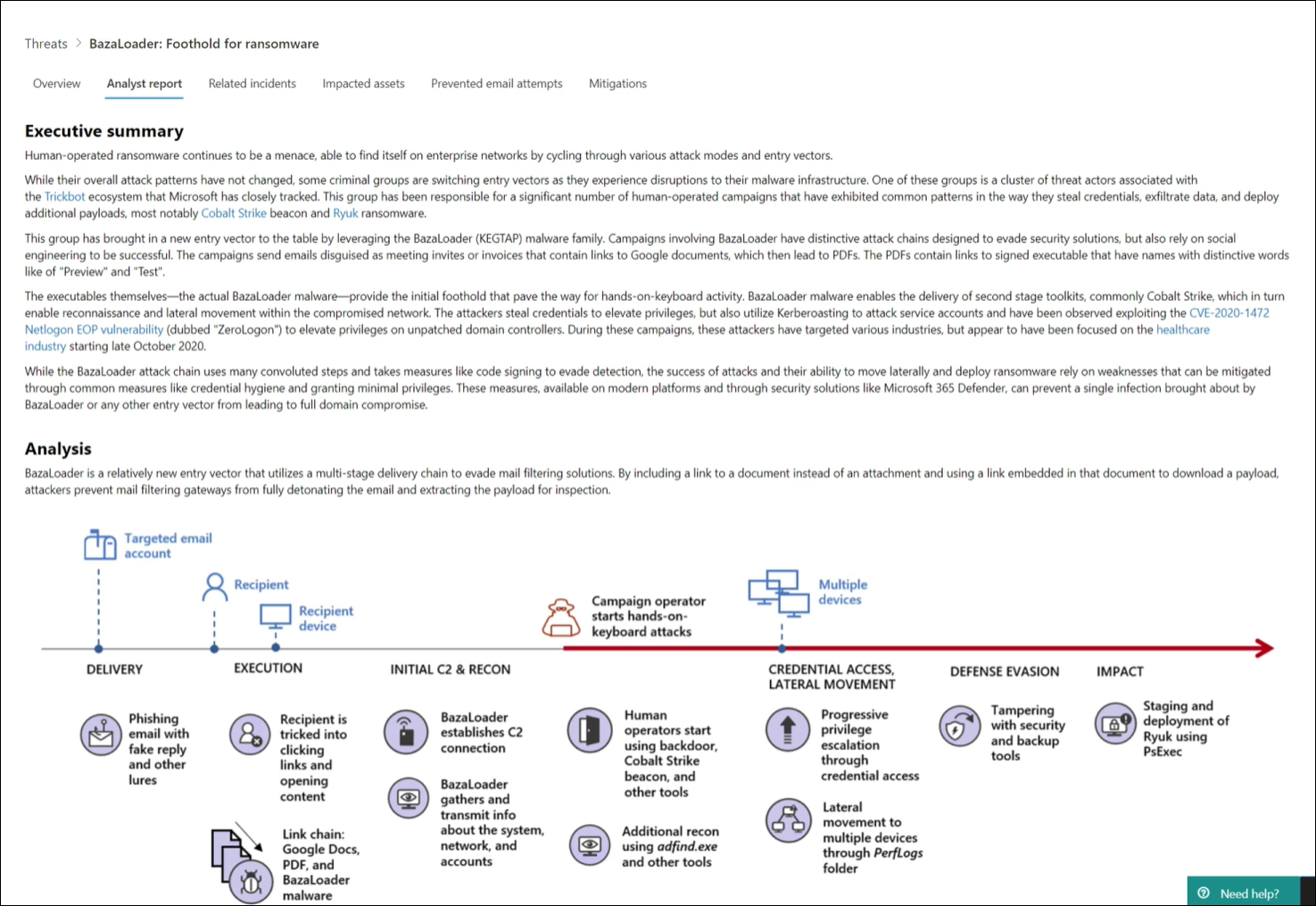 Each section of the analyst report is designed to provide actionable information. While reports vary, most reports include the sections described in the following table.

Threat analytics dynamically tracks the status of security updates and secure configurations. This information is available as charts and tables in the Mitigations tab.

While you can use the Mitigations tab to assess your security posture against a threat, these recommendations let you take additional steps towards improving your security posture. Carefully read all the mitigation guidance in the analyst report and apply them whenever possible.

Understand how each threat can be detected

Like the list of antivirus detections, some EDR alerts are designed to generically flag suspicious behavior that might not be associated with the tracked threat. In such cases, the report will clearly identify the alert as “generic” and that it doesn’t influence any of the charts in the report.

Prevented email attempt information gives you insights on whether your organization were a target of the threat tackled in the analyst report even if the attack has been effectively blocked before delivery or delivered to the junk mail folder.

While detections allow you to identify and stop the tracked threat automatically, many attack activities leave subtle traces that require additional inspection. Some attack activities exhibit behaviors that can also be normal, so detecting them dynamically can result in operational noise or even false positives.

Advanced hunting provides a query interface based on Kusto Query Language that simplifies locating subtle indicators of threat activity. It also allows you to surface contextual information and verify whether indicators are connected to a threat.

Advanced hunting queries in the analyst reports have been vetted by Microsoft analysts and are ready for you to run in the advanced hunting query editor. You can also use the queries to create custom detection rules that trigger alerts for future matches.