The Microsoft Defender for Cloud Apps anomaly detection policies provide out-of-the-box user and entity behavioral analytics (UEBA) and machine learning (ML) so that you’re ready from the outset to run advanced threat detection across your cloud environment. Because they’re automatically enabled, the new anomaly detection policies immediately start the process of detecting and collating results, targeting numerous behavioral anomalies across your users and the machines and devices connected to your network. In addition, the policies expose more data from the Defender for Cloud Apps detection engine, to help you speed up the investigation process and contain ongoing threats.

The anomaly detection policies are automatically enabled, but Defender for Cloud Apps has an initial learning period of seven days during which not all anomaly detection alerts are raised. After that, as data is collected from your configured API connectors, each session is compared to the activity, when users were active, IP addresses, devices, and so on, detected over the past month and the risk score of these activities. Be aware that it may take several hours for data to be available from API connectors. These detections are part of the heuristic anomaly detection engine that profiles your environment and triggers alerts with respect to a baseline that was learned on your organization’s activity. These detections also use machine learning algorithms designed to profile the users and sign in pattern to reduce false positives.

Anomalies are detected by scanning user activity. The risk is evaluated by looking at over 30 different risk indicators, grouped into risk factors, as follows:

Based on the policy results, security alerts are triggered. Defender for Cloud Apps looks at every user session on your cloud and alerts you when something happens that is different from the baseline of your organization or from the user’s regular activity.

These policies will appear on the Defender for Cloud Apps policies page and can be enabled or disabled. 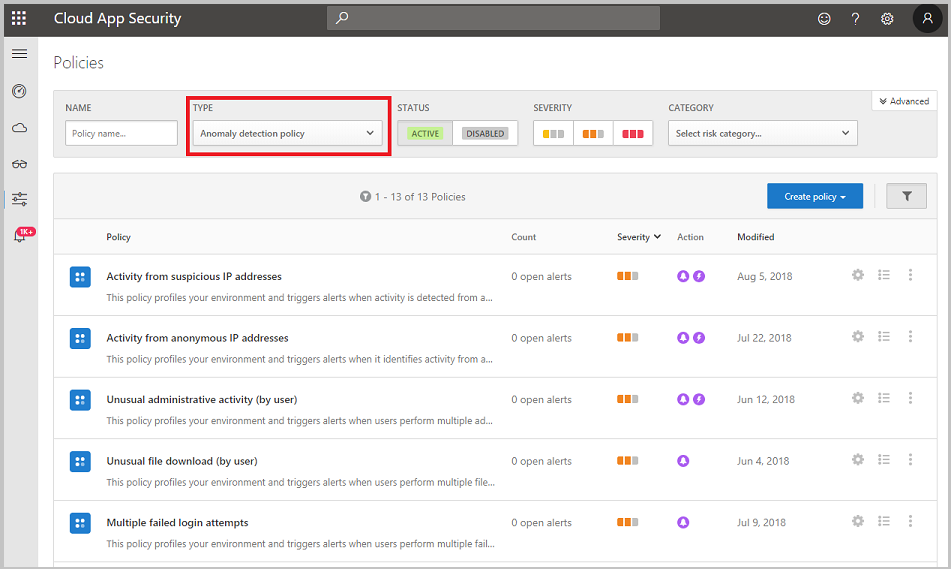 The detection looks for users whose account was terminated in Azure AD, but still perform activities in other platforms such as AWS or Salesforce. This is especially relevant for users who use another account (not their primary single sign-on account) to manage resources, since these accounts are often not terminated when a user leaves the company.

Defender for Cloud Apps only alerts you for each forwarding rule that is identified as suspicious, based on the typical behavior for the user.

Unusual ISP for an OAuth App

These detections identify users who perform:

These policies look for activities within a single session with respect to the baseline learned, which could indicate on a breach attempt. These detections leverage a machine learning algorithm that profiles the users log on pattern and reduces false positives. These detections are part of the heuristic anomaly detection engine that profiles your environment and triggers alerts with respect to a baseline that was learned on your organization’s activity.

You can enable automated remediation actions on alerts generated by anomaly detection policies.

To affect the anomaly detection engine to suppress or surface alerts according to your preferences:

By default, legacy sign-in protocols, such as those that don’t use multi-factor authentication (for example, WS-Trust), are not monitored by the impossible travel policy. If your organization uses legacy protocols, to avoid missing relevant activities, edit the policy and under Advanced configuration, set Analyze sign in activities to All sign ins.

Each anomaly detection policy can be independently scoped so that it applies only to the users and groups you want to include and exclude in the policy. For example, you can set the Activity from infrequent county detection to ignore a specific user who travels frequently.

You can triage the various alerts triggered by the new anomaly detection policies quickly and decide which ones need to be taken care of first. To do this, you need the context for the alert, so you can see the bigger picture and understand whether something malicious is indeed happening.