Only users with “exceptions handling” permissions can manage exceptions (including creating or canceling). Learn more about RBAC roles.

Select a security recommendation you would like create an exception for, and then select Exception options and fill out the form.

If you have filtered by device group on any of the threat and vulnerability management pages, only your filtered device groups will appear as options.

This is the button to filter by device group on any of the threat and vulnerability management pages:

If your organization has more than 20 device groups, select Edit next to the filtered device group option.

A flyout will appear where you can search and choose device groups you want included. Select the check mark icon below Search to check/uncheck all.

If you have global administrator permissions, you will be able to create and cancel a global exception. It affects all current and future device groups in your organization, and only a user with similar permission would be able to change it. The recommendation state will change from “active” to “full exception.”

Some things to keep in mind:

The following list details the justifications behind the exception options:

Navigate to the Exceptions tab in the Remediation page. You can filter by justification, type, and status.

Select an exception to open a flyout with more details. Exceptions per devices group will have a list of every device group the exception covers, which you can export. You can also view the related recommendation or cancel the exception.

How to cancel an exception

To cancel an exception, navigate to the Exceptions tab in the Remediation page. Select the exception.

Cancel the exception for a specific device group

Select the specific device group to cancel the exception for it. A flyout will appear for the device group, and you can select Cancel exception.

View impact after exceptions are applied 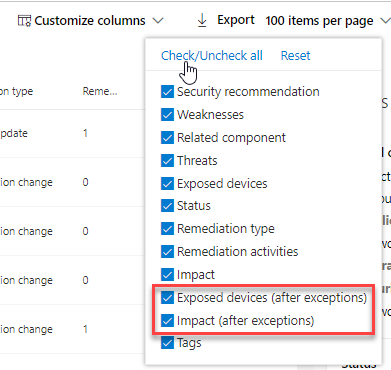 The exposed devices (after exceptions) column shows the remaining devices that are still exposed to vulnerabilities after exceptions are applied. Exception justifications that affect the exposure include ‘third party control’ and ‘alternate mitigation’. Other justifications do not reduce the exposure of a device, and they are still considered exposed.