By reducing the different attack surfaces, you can help prevent attacks from happening in the first place.

During your initial preparation, it’s vital that you understand the capabilities of the systems that you’ll put in place. Understanding the capabilities will help you determine which ASR rules are most important for protecting your organization.

ASR rules are only one capability of the attack surface reduction capabilities within Microsoft Defender for Endpoint. This document will go into more detail on deploying ASR rules effectively to stop advanced threats like human-operated ransomware and other threats.

(2) Some ASR rules generate considerable noise, but won’t block functionality. For example, if you’re updating Chrome; Chrome will access lsass.exe; passwords are stored in lsass on the device. However, Chrome should not be accessing local device lsass.exe. If you enable the rule to block access to lsass, it will generate a lot of events. Those events are good events because the software update process should not access lsass.exe. Enabling this rule will block Chrome updates from accessing lsass, but will not block Chrome from updating; this is also true of other applications that make unnecessary calls to lsass.exe. The block access to lsass rule will block unnecessary calls to lsass, but won’t block the application from running.

Although multiple methods of implementing ASR rules are possible, this guide is based on an infrastructure consisting of:

To take full advantage of ASR rules and reporting, we recommend using a Microsoft 365 Defender E5 or Windows E5 license, and A5. Learn more: Minimum requirements for Microsoft Defender for Endpoint.

Microsoft Defender Antivirus must be enabled and configured as primary anti-virus solution, and must be in the following mode:

Microsoft Defender Antivirus must not be in any of the following modes:

Cloud Protection (MAPS) must be enabled

The following Microsoft Defender Antivirus component versions must be no more than two versions older than the most-currently-available version:

As with any new, wide-scale implementation which could potentially impact your line-of-business operations, it is important to be methodical in your planning and implementation. Because of the powerful capabilities of ASR rules in preventing malware, careful planning and deployment of these rules is necessary to ensure they work best for your unique customer workflows. To work in your environment, you need to plan, test, implement, and operationalize ASR rules carefully. 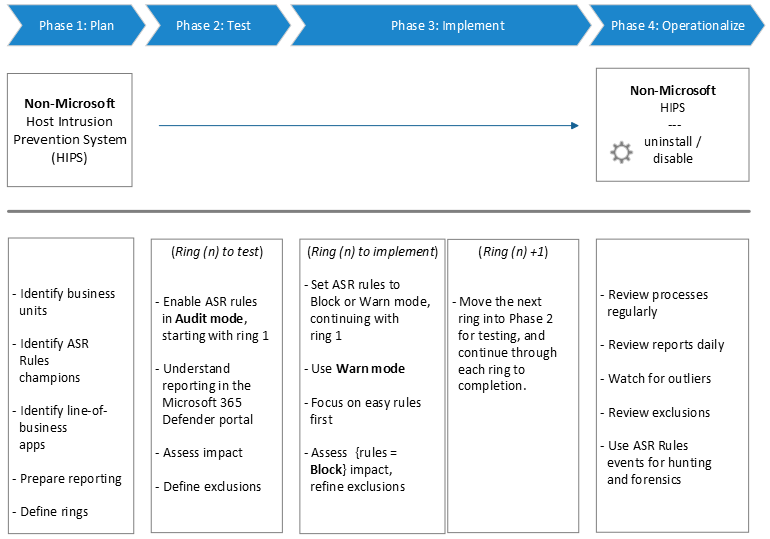 For Customers who are using a non-Microsoft HIPS and are transitioning to Microsoft Defender for Endpoint attack surface reduction rules: Microsoft advises customers to run their HIPS solution side-by-side with their ASR rules deployment until the moment you shift from Audit to Block mode. Keep in mind that you must reach out to your 3rd-party antivirus vendor for exclusion recommendations.